Explore the Scenery Beyond the Hotel Rooms

Founded in 1877, Tombstone was Apache country before a young prospector named Ed Schieffelin happened upon it. A born explorer stationed at Fort Huachuca, he ignored the derision of his friends, who all said he’d find nothing but his tombstone out there. With only thirty cents in his pocket, he set out anyway, and in 1877, discovered an enormous silver cache. With characteristic humor, he christened the first of his four profitable mines “Tombstone” and a legend was born. 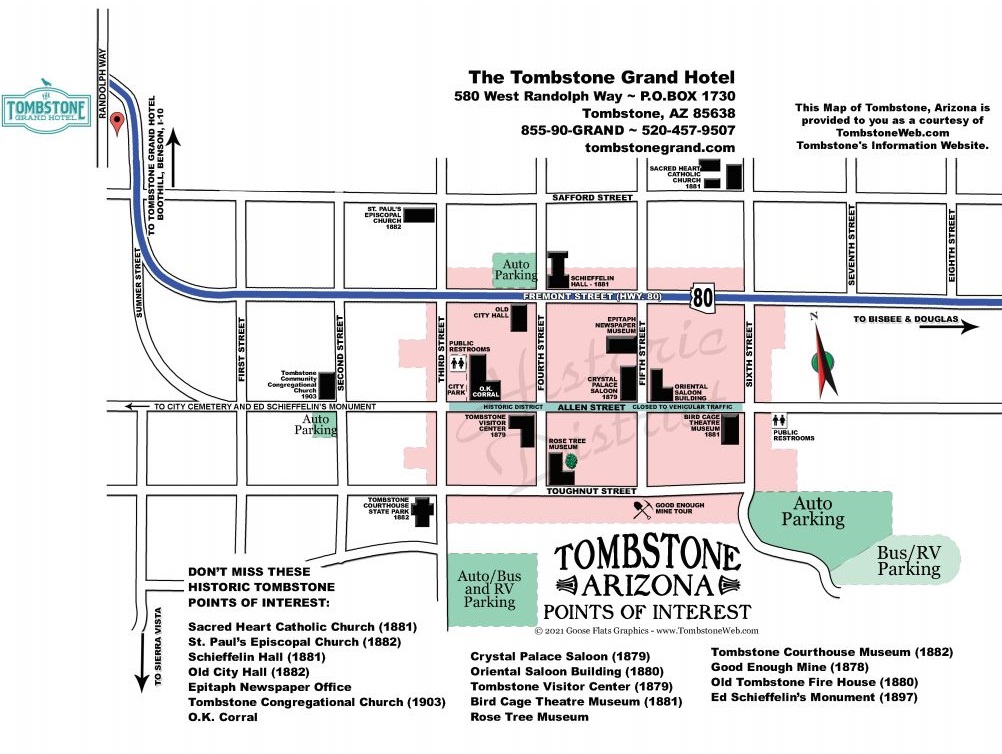 Start your day off right aboard the Tombstone Trolley. "Settle back in yer saddle" as our expert conductors share with you the history, legends, and lore of Tombstone’s colorful past. Enjoy a three-mile, half-hour tour of our most famous landmarks. The trolley ticket will provide discounts to shoot-outs, restaurants, museums, and more. On Friday/Saturday nights you can reserve your seat on our 1-hour long "Ghost and Murder Tour." Our "ghost host" will leave no Tombstone unturned! Call for advance tickets. Located at 4th and Toughnut.

Find out if the old Apache curse is real—does it still affect Tombstone? Take a 3-mile trolley ride that will transport you into the chilling world of the paranormal where you will hear about the murders and documented ghosts of Tombstone. From the gallows at the Tombstone Court House to a 20-minute visit at Boothill Graveyard, to the bloodiest corner in all of Tombstone, you will hear and see it all. See the three most haunted places in Tombstone… a 60-minute tour that begins at 4th and Toughnut Streets every Friday and Saturday evening at dusk.

Enjoy a half-hour comedy stunt show with the National Champion Gunfight team The Tombstone Cowboys at Old Tombstone Western Town. This award-winning show features actors and stuntmen performing live shows. The theme park also includes Pan-for-Gold, an interactive shooting gallery, mini-golf, the Chuckwagon Café, and Cerveza’s Cantina, where you can "settle the dust in yer throat" with a beer or sarsaparilla! Three explosive and entertaining shows daily. Located at 4th and Toughnut.

Like most Old West boom towns, Tombstone, Arizona popped up seemingly overnight. Ed Schieffelin’s initial strike turned out to be anything but a fluke, and as news of the silver vein spread, the town of Tombstone sprang up from the desert. By the early 1880s, the town boasted nearly 20,000 residents and was ringed by mine claims. The “Good Enough” was Ed Schieffelin’s second claim, so named because it was good enough for him.

As portrayed in novels, movies, and TV shows, the gunfight at the OK Corral has come to epitomize the Wild West. In Tombstone, the site where the 30-second gun battle actually happened has taken on mythic proportions over the last century. Inside the corral, you'll find not only displays on the shootout, but also exhibits on mining life, the infamous ‘soiled dove’ prostitutes, and local photographer C. S. Fly, who ran the boardinghouse where Doc Holliday was staying at the time. Next door is the Tombstone Historama, a multimedia exploration of the town’s legacy.

When the smoke cleared in 1881, three men lay dead. They were later carted off to the Boot Hill Graveyard, on the north edge of town. The cemetery is open to the public and is entered through a gift shop on Ariz. 80. The graves of Clanton and the McLaury brothers, as well as of others who died in gunfights or by hanging, are well marked. Entertaining epitaphs grace the gravestones; among the most famous that of Lester Moore—"Here lies Lester Moore, 4 slugs from a .44, No Les, no more." The cemetery is open and charges no admission to the public.

The Bird Cage was the most famous honky-tonk in America between 1881 and 1889. The New York Times referred to it as the wildest, wickedest night spot Basin Street and the Barbary Coast. It was a combination saloon, gambling hall, and house of ill fame. The Bird Cage stands as one of the oldest buildings in town. For Old Tombstone atmosphere and authentic artifacts from the town's heyday, this place is hard to beat!

Big Nose Kate's, on Allen Street between Fourth and Fifth streets is an equally entertaining spot full of Wild West character and characters and, like many buildings in town, is said to be haunted. It sits on the site of the former, original Grand Hotel, where the Earps stayed when they first hit town.

If you want a cold drink or a good meal, Tombstone has a couple of very lively saloons. The Crystal Palace, at Allen and Fifth streets, was built in 1879 and has been completely and faithfully restored. This is one of the favorite hangouts for the town's costumed actors and other would-be cowboys and cowgirls.

We offer a “behind the scenes” stroll through Tombstone's most amazing history. Among the things discussed will be the mining history, the town history, and, of course, the factors which led up to undoubtedly the most famous gunfight in the history of the old west. In addition to insights into day-to-day life in 1880's Tombstone, participants will be treated to the opportunity to walk in the actual footsteps of the Earps and Doc Holliday as they made their way to their rendezvous with destiny behind the O.K. Corral. Tour time is approximately one hour and is designed to be as entertaining as it is educational.

One of the most imposing and well-preserved buildings in town is the Tombstone Courthouse State Park, at Third and Toughnut streets. Built in 1882, the courthouse is now a state historic park and museum—actually the smallest in the State Park system—containing artifacts, photos, and newspaper clippings chronicling Tombstone's lively past. In the courtyard, the gallows that once ended the lives of outlaws and bandits still stand.

Tombstone has long been a tourist town, and its streets are lined with souvenir shops selling wind chimes, western artifacts, and other souvenirs. There are also several museums scattered around town highlighting unique aspects of Tombstone's history. At the Rose Tree Inn Museum, at Fourth and Toughnut streets, you can see the world's largest rose bush; brought over from Ireland as a cutting over a century ago, the ‘bush’ is now an enormous canopy which, when in bloom, saturates the entire town with its fragrance. Inside the museum are also antique furnishings from Tombstone's heyday in the 1880s.